Technically I think our boys are in a layover at the moment rather than in flight -- but they are between Heathrow and Anchorage.

Keirron asked me (Jeff) to make entries during the exped when they have a chance to SMS or call in news. The proper work will begin later this week, but I know how pre-trip logistics go (we paddled together a few years ago) - so thought I would add a short post with some facts and links.

Anchorage, AK is an hour ahead of Seattle (GMT-9); I update this from Stockholm (GMT+1), so delays are my fault. Weather is decent today in the region; some light snow and moderate breeze. Here's a weather site I find useful: http://www.yr.no/place/United_States/Alaska/Dutch_Harbor/

We may talk about wind from time to time; nautical measure (the knot) is a bit more than a mile per hour, or just under 0,3 meters per second to a European. For a helpful (Beaufort) scale for comparisons check wikipedia: http://en.wikipedia.org/wiki/Beaufort_scale

I'm a geologist, so I can't help pointing out this area's uniqueness. Many people know about the San Andreas fault, which is where the bad earthquake movies in Hollywood come from; this strike-slip fault separates the Pacific oceanic plate from the North American continental plate, which slide along on another from LA through California's bay area.

This boundary changes character up north to create the Aleutian islands. Alaska is part of the continental North American plate; the Pacific plate plunges beneath this, melting deep under the plates and generating a heated arc of molten rock: the resulting volcanoes form the very active Aleutian Island chain, which is over 2500 km (1350 NM) long.

We all look forward to some images once they have boots on the ground, but I've no doubt there will be plenty of displays of the region's wild and raw character over the coming weeks. 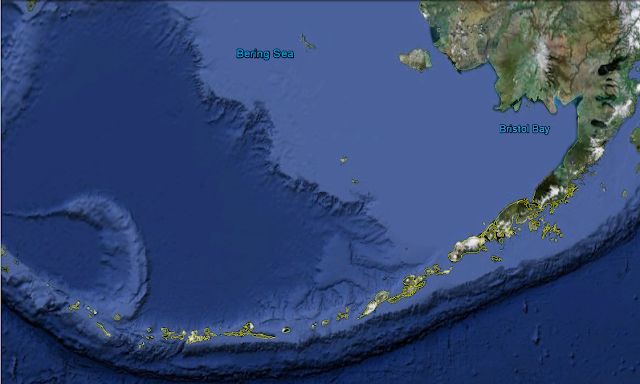 With just two weeks before Keirron and George leave the Isle of Man on their adventure, training has reached its peak, and adjustments and fine details are being applied to the logistical web.

George Shaw broke the 'Round the Isle of Man Record' in a standard sea kayak, completing the 115km (70.3 Nautical Miles) in 13 hours 34 mins! A major goal on his personal training program, George was delighted with the result.
http://adventurousexperiencesblog.blogspot.com/2012/03/george-shaw-smashes-kayak-record.html 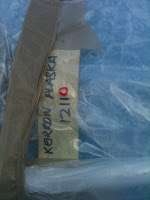 Mine will be there now as well, so the main ingredients are coming together nicely, we're expecting to confirm the final pieces of sponsored kit in the next few days.

Inspiration
Having researched in depth, I have managed to touch bases with members of each of the Early Bering Sea Expeditions, and got a host of advice and inspiration from them. I'm very grateful for your time, Derek, Jon and Rob and we'll certainly take your good wishes with us. Amazing explorations which took place prior to our modern specialised kit... "Woolie jumpers and welly boots, made their own neoprene cuffs for their jackets... had hurricane force winds..." Derek Hutchinson. He admired "..the native Aleut's, the best kayaker's in the world, who would paddle 1000's miles without getting out of their kayaks."
"Life expectancy of 10 - 15 mins in the water, local fisherman call it 'liquid ice'..."

I've also been in touch with Justine Curgenven, getting ideas and info from her expedition along the Kamchatka Peninsula, in 2003.
Links to inspirational people and journeys around the Bering Sea.

As the busier season is under way here on the Isle of Man, wildlife is flourishing, and our students are reaching their progressive goals and preparing for their own expeditions, its an exciting place to be!
http://adventurousexperiencesblog.blogspot.com/

Posted by Keirron at 8:37 am No comments: