Since we've had time to look around, here's a few pics; 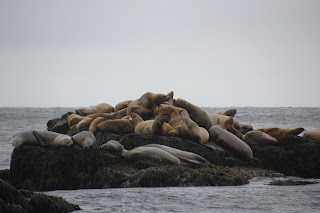 a Sea Lion haul-out on a reef offshore 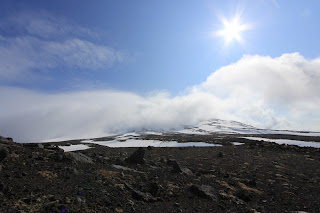 had a little hike up the Volcano, to get a view and see what there was to see. Herbert has so much volcanic debris, and formations from the harsh environment, quite barren. But occasionally, the mist would clear, and blue sky appear, then it looked great. 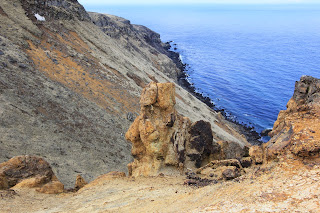 A Sea Otter doing backstroke across the bay in front of the tent. Due to the protected nature of the boulder beach we camped on, the sea often looked fine, so a quick look from the higher slopes would identify the conditions off-shore, and the on-going wind... 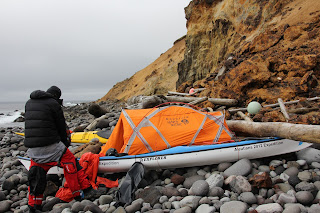 sheltered that is, from a lot of the wind, except the occasional Willawaw dropping on the tent on the first night, and some days later, the storm predicted came in, and blew 50 knots!

As the tent (and half loaded kayaks it was attached to) blew across the boulders, me and George wrestled with our worldly possessions, the tide coming higher, rain lashing down. Finally got it re-positioned, back against the cliff, and huddled inside listening to the storm raging. Next morning, it had calmed a little and we could survey the scene. 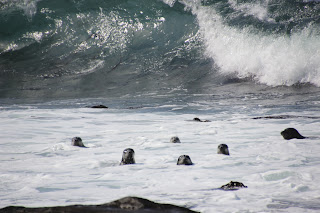 The seal population watched us daily, and played in the surf : )
Fascinating to watch them, and the Sea Lions patrolling daily, observing us.

Plenty of time for contemplation, watching the small weather windows, the strong cross currents and unpredictable wind, and our slowly diminishing food supply : )
Billy's boat was due to pass on the 28th or 29th, heading back towards Dutch Harbor.
K