The guys have begun their circumnavigation early this morning. The starting point is Killard Point to the southern entrance of Strangford Lough in Northern Ireland. 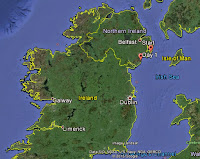 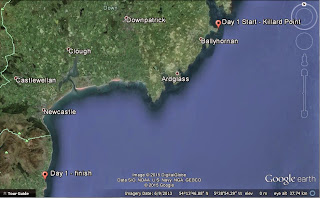 Received an update text from Keirron, "On water just before 5am, paddled out of Lough and then south in bouncy sea, hard push into Newcastle harbour at 10.30 where Mike McClure was waiting with Croissants and fresh tea and coffee! Early lunch in Olive Bizarre and on the water again 1pm"

Had a further message saying they had been pushing a strong south wind but have paddled the first 25 miles today and have camped up for the night south of Bloody Bridge, hoping for more shelter tomorrow :)

The increasing Southerly wind that we have also been experiencing today on the island is due to move to a Westerly tomorrow so should hopefully provide them with some shelter for a good push south tomorrow.