Well we're done, and what an awesome trip, a truely Adventurous Experience, and at times, some may say a horrendous experience! 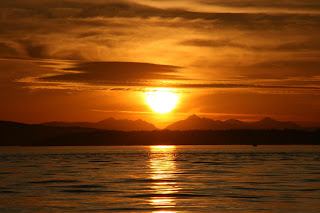 Got back to the San Juans late last night, stopping to take numerous pics of the beautiful sunset, flat conditions, accompaned by the sounds of pods of harbour porpoise, around us as we completed the last 20 miles... acrobatic seals and so much bioluminesence. 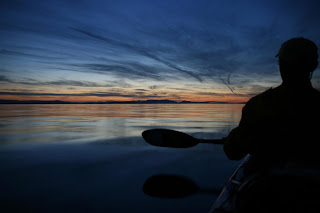 After setting off in similar conditions, it was great to see our luck continued right up the finish... with a lengthy paddle against the tide! (Wouldn't have it any other way.) 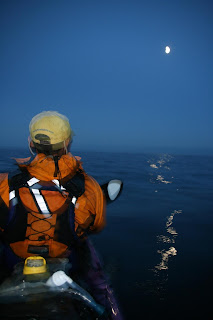 More pics up in the next day or so, in the meantime - a few explanations of how the last few days worth of paddling got extended. There was a post about the skeg, but here is the issue! After our only day off the water at Cape Scott, and shorter 14hr days following after, we were feeling fully fit and got up to our target of 50 nautical miles per day for the 3 days till Tofino. It was next morning we noticed damage and a hole in the front of the kayak, and repaired it as best we may. Whatever caused this, also impacted the directional stability of the Mighty Triton, (which I would certainly not trade for any other double on the market!) Long days and plenty of exposure to sun and conditions had made us less sharp, and the following evening when moving the kayak with the skeg not fully up, we smashed it into a rock, and broke the mounting inside.

Next morning the kayak would only go in circles despite all manner of attempts. This was to be the first of 4 days when we would waste many potential paddling hours creating an auxilary skeg / rudder 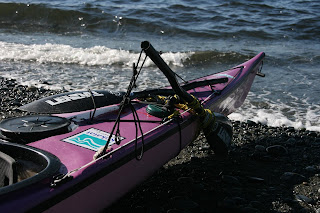 to give us some control in the particulary large conditions we were experiencing. This felt like dragging a drogue and certainly lessened our cheerfulness at times...

However, as the title goes, it could have been much worse!
At every turn of events, there would be an equally stunning positive experience to balence the adversity, blisters, jelly fish burns, physical challenge or horrendous experience.
When on one of our many paddles which extended to nightfall, a violent wind sudenly blew up, threatening to take us offshore, we fought to bring the boat into shore, and then into the shelter of the cliffs, pulses quicked a little, and then their was a Marmot sitting their, cleaning itself, and this brought everything back into perspective, life goes on regardless.
At Seymour Narrows, after being cheated of our Horrendous Experience with the whirlpools, 15 knots currents in our favour and general mayhem, we were floating slowly down current, and then next thing a pod of Pacific White-Sided Dolpins appeared, surfacing near the kayak, and continued with us all the way down the channel.
A hard day in bouncy conditions, grey and misty, then Grey Whales appear, feeding around the kayak, surfacing close by, very exciting!

The whole trip has been such a humbling experience.

Throughout the trip, luck has been right with, and I've no doubt its been due to all the well wishes of our friends at home and abroad. So many thanks guys for all your help, and for the many people who went our of their way to accomodate us, welcome us, and touch us with their kindness and generosity. We have been so fortunate to meet so many like minded peole who share our enthusiasm for the outdoors, environment around us and life in general!

Bob Kearney from CHTV caught up with us at Victoria, 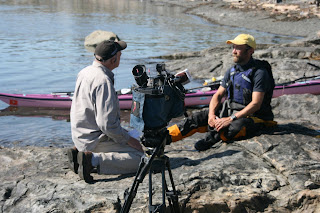 shot some footage and interviewed Jeff and myself, to be aired today. We talked about the experiences, setting a new record time round Vancouver Island by Kayak, 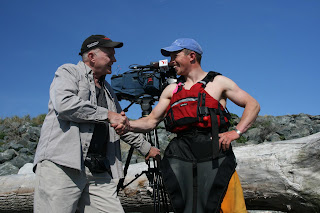 and done in a tandem with a total stranger!

Jeff its been an absolute pleasure!
till next time...
Keirron
Posted by Keirron at 8:33 pm

congrats on the circumnavigation!

but i am sorry to report you are not the first paddlers to do it in a double, a couple from Vancouver Island, Dag Goering and Maria Coffey did that trip a few years agao in a Current Designs Libra XT double yak and went on to write a captivating book about it titled "Into the wild". great read if you can get your hands on it!

They probably aren't the first either, some of the local old-school paddler in the PNW have more seat time in open coast conditions than the majority of todays "well-known" expedition paddlers. they just don't market themselves as much ;)

Hey Jeff, Wow! What an awesome experience you guys have just had, i've only just found out about this blog fom Jon. Very inspirational, i'm really stoked for you. Looking forward to hearing all about it over a pint when you get back.

I share your rudder pains mate (on a much more insignificant scale) Cleaver is out of action, belted the rudder on a hidden log Tuesday morning.....Little taste of home for you!

Hiya Kashkenshiuk
thanks very much for clarifying that, the only claim we are making is that it is the fastest time known so far by kayak, (others are purely speculation) and i'm pretty sure there will be a few paddlers coming through to challenge the time in the future, such as Joe o' next month... Hoping it will create positive discussion points, encourage other paddlers to share their experiences and inspire others who wish to give it a go.
Best wishes
Keirron

Thanks Kashkenshiuk - we appreciate the info!

Looks like it's called "Visions of the Wild: A Voyage by Kayak Around Vancouver Island." Powell's is out of stock at the moment, but I'm enthusiastic to read about others' adventures.

Hey folks. If anyone is interested in catching the progress on Joe O'Blenis's solo circumnavigation record attempt, he'll be reporting updates at www.thewildcoast.ca when possible.