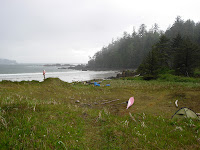 No word from the boys yet this evening, but I did receive this picture from Daniel and Shannon of Victoria who were on a backpacking trip out to Cape Scott last week and spotted the pink kayak. In their email they explain "That is Guise Bay in the background, looking southwest. Picture was taken on Saturday, around noon. The lighthouse keeper at Cape Scott said that the winds were blowing from the southwest at 35 knots. When we walked across the beach the rain was coming in sideways. The guys were set up in a little depression in the dunes, protected from the wind. We had seen them paddle in front of Nels Bight (with our binoculars) the previous evening, just before sunset. We said to each other "who is crazy enough to be paddling out here in this weather?" We were only able to know who it was from the "Vancouver Island Record Attempt" on the side of the kayak . . ."

I don't have confirmation, but I expect they had a long day today and rounded the Brooks Peninsula. The wind has died down and they should have had pretty good conditions - well, as good as you get around there. Tomorrow there is another low pressure system coming in and the weather looks unfavorable again. Specifically, the forecast is: "Gale warning issued.
Winds southwesterly 5 to 15 knots backing to southeast 15 to 25 overnight. Winds rising to southeast 25 to 30 Wednesday morning With southeast gales 35 developing near the headlands. Mainly cloudy with showers developing Wednesday morning. Seas near one metre building to one to 2 Wednesday morning. Outlook. Winds easing to light to moderate southeast then becoming light to moderate variable." After this system comes through they seem to have a good window of weather through to early next week, so they are expecting to be able to complete their circumnavigation by early next week. However, its still a bit early to make predictions as they are only half way around at this stage. -- Jon
Posted by Jon at 7:50 am